What do you do when something long-dead and reeking is way down the drain?

I wanted to think I was smelling sewer gas coming from one of my sink drains, but I realized after doing everything standard including cleaning out my wide-open roof vents that there was no way that was what I was smelling was sewage-related. The smell is nothing like when I stand over the open septic tank or clean the outlet filter. It smells like death.

I ordered a 10M endoscope and put it down the riser under the offending sink today. The sink is nearest the septic tank, so it's the farthest 'downstream' making it natural the stench would surface there. I was able to make it 8 feet with a hook attachment on the front of the endoscope before I realized the effort was futile. In the big horizontal 'master' pipe under the house leading directly to the septic tank, there's a layer of brown waste with bright orange chunks (I'm sure you all want me to post the photo from the endoscope ), and given the smell has persisted for so long, I knew that whatever remained of the rodent, bird or snake that climbed down the roof vent had long been broken down into an amorphous mass of carnage I couldn't possibly pull out with the endoscope's hook.

Whenever I pour a septic-safe drain cleaner down the sink, the smell becomes much milder for about a week before returning, milder every time. I think that if I keep pouring Liquid-Plumr down the drain, eventually, only bones will be left and those will slowly be carried downstream, and it won't reek anymore. The smell is so strong it comes up through the P-trap of the sink (the water never evaporates/siphons), unlike regular sewer gases which are kept at bay. The septic is a typical system, so the sink/shower water all goes to the same pipe that the toilet water goes to.

The riser under the sinks are all 1-1/2", so I can't turn the snake into a 4" "ramrod" by rapping a sock around it to push the remains of the carcass all the way to the septic tank where it could be broken down or pool-netted out.

It's been 3 years since my 1500 gallon septic tank was installed, and it hasn't been pumped yet. Should I say 'screw the septic flora/fauna' and just hit the sink with periodic gallons of bleach-containing Drano Max to speed along the decay process, then get the tank pumped and restored? The tank level is low, but it's probably about time anyway and this seems like it may be the cheapest solution.

I'm just an amateur handyman. The "nuclear option" would be determining the exact location of the carcass with an endoscope and cutting out that section of pipe, right? Doesn't seem worth the effort or the money.

What would a real plumber do in this situation? I don't think the carcass can be hooked and pulled up through the drain at this point since it's been down there for so long.

(Yes, I will be putting wire mesh over my roof vents so that my house doesn't 'eat' anything else in the future )

tl;dr: Something is dead deep in my pipes, at least 8 feet past the riser under the sink nearest the tank, and has been for 6 weeks. It's probably too decayed to be pulled out of the drain in a single piece with a hook. I have a standard septic system. What would you do?
Last edited: Jul 10, 2020

There should be no way in the world that any sewer related smells come in to a house unless there is no p-trap somewhere.
The entire point of inventing traps and vents was precisely why modern plumbing evolved, so we benefit from those inventions and do not have smells inside our dwellings.
Drain cleaning equipment will do anything needed if a piping system is properly designed, with cleanouts for any run longer than 5'.

Post some good clear pics of the plumbing under your smelly sink.
R

breplum said:
There should be no way in the world that any sewer related smells come in to a house unless there is no p-trap somewhere.
The entire point of inventing traps and vents was precisely why modern plumbing evolved, so we benefit from those inventions and do not have smells inside our dwellings.
Drain cleaning equipment will do anything needed if a piping system is properly designed, with cleanouts for any run longer than 5'.
Click to expand...

Does this mean my idea that the carcass is so noxious that its fumes permeate the always-full P-trap under the sink and rise up out of the sink drain shouldn't be possible? I monitored the level of the trap water with a tape measure several times early on to rule out siphoning and have switched AAVs around multiple times (even though I doubted it was AAV-related since I've had no draining problems).

This is from an identical sink elsewhere in the house which I shared in another thread: 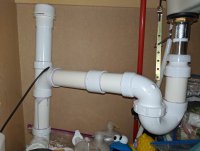 You can see the top of a cleanout valve in this pic. These are under all sinks, for some reason, not just the kitchen as seems to be standard.

What's interesting is the first two days I smelled the stench back in May, the offending bathroom's second sink drain also reeked, though not as bad. This was when the smell was at its absolute strongest, before the first 'treatment' with Drano/Liquid-Plumr. It's never been as bad since then and must be too faint for me to smell in the other sink. The plumbing of these two sinks is not shared under the cabinets--they only meet where they empty into the main drain line under the house.

(By the way, Jeff, this is the problem that led to me posting the other thread about changing out all my AAVs. I was confident it wasn't AAV-related, but wanted to upgrade them anyway after realizing cheap AAVs are especially prone to failure. Foul smells never came from within the cabinets, just out of the sink drains).

From the other thread, I think you are in a mobile home, right?
Maybe something like a raccoon is dead under it?
Otherwise, a defective AAV could definitely release stink out of the sink or the cabinet.
R

Jeff Handy said:
From the other thread, I think you are in a mobile home, right?
Maybe something like a raccoon is dead under it?
Otherwise, a defective AAV could definitely release stink out of the sink or the cabinet.
Click to expand...

Yes. The first thing I did in May was check under the house because I assumed it was something like that and that the smell was wafting up through the 'marriage line' where the two segments of the house meet in the middle. It's all clean and there's no smell underneath. The smell only comes through the sink, or if I remove the AAV, the riser top. The bathroom in question has had completely different AAVs in it and it's unlikely all 5 AAVs in the house failed simultaneously at the 3-year mark.

My understanding is an AAV, depending on the kind, can fail in a closed position, in which gurgling and/or siphoning would occur due to a permanent negative pressure state, or an open position, in which the stench would enter into the cabinet underneath the sink. None of this has happened. Membrane corrosion would also result in it failing in an open state. The drain evacuates water perfectly cleanly, even if I pour an entire bucket of water down it at once to increase flow far beyond what my hot/cold line could provide. To reiterate, all roof vents are clear and the shower/toilet in the bathroom in question are vented via the roof.

not a Junior Member anymore!

You looked under the trailer, did you look up top. Or maybe somehow something got in the walls or in ceiling?
R

SHEPLMBR said:
You looked under the trailer, did you look up top. Or maybe somehow something got in the walls or in ceiling?
Click to expand...

Yep. It's in the drain line. Something crawled down one of the exposed roof vents and died in the drain. That's the only thing that makes sense in the context of a closed septic system and the fact that the smell is originating specifically from the drain. It's nowhere else in the house, and when it's faint, you have to strongly, and closely, sniff the sink drain. I bought a few gallons of generic non-bleach drain cleaner and have been able to cover up the smell by using 1/4 bottle every 4 or 5 days. I'll persist until the thing has decayed sufficiently not to smell.

I gather it shouldn't be possible, but whatever is down there, it reeks intensely enough that the stench diffuses through the trap water underneath the sink. There's typical waste visible in the line some 8 feet down where the sink's drain meets the thicker, main pipe leading to the septic, but all I smell is death.
You must log in or register to reply here.
Share:
Facebook Twitter Reddit Pinterest Tumblr WhatsApp Email Link