Well, I went in & hit a snag- the shutoff is leaking. I managed to cut stuff apart & start assembling and realized my dumb a$$ should have measured first because the hose is too long but I need it to get the right angle. I thought about getting a longer metal pipe at the inlet side, but I was barely able to turn it bc of the route of the outlet side. It got really hot & wasps were buzzing around. Heat made my brain shut down so I'm cooling off & coming up with a plan. I'm going to skip some of the parts & see if I can get it to go together. I wish I had more space to work with. If the pipe was all the same size it wouldn't be a problem, but I have to convert from 3/4" up to 1-1/4" and they didn't sell a single fitting to accomplish that so I need at least two to get there. I can stick a 3/4" coupling inside the 1-1/4" to 1" elbow. I wish I had just a straight piece. Worst case I could always go to the hardware store & get one.
I'm about to go out there & try the parts. Wish the damn wasps weren't around ,but I don't want to spray poison near the water well. One of my cats was in there with me watching me work. She got up on the pressure tank at one point and put her paws on my chest and wanted to be cuddled. Then she sat on the ground & started swatting wasps that came near her. One of the buggers landed on my sleeve for awhile. I kept saying "I'm not going near your nests, leave me the f*** alone!"

Edit: I think I've figured out a solution but I can't cut before the shutoff until the water level in the holding tank goes down more. I opened the shutoff up & it was pouring water out & flooding the pump house, so for now I have it closed & normally the water level in the holding tank goes down when the pumps are off. Now, I don't know if the water drains into the lines via gravity, or if it just goes back down from where it came. But, I'm going to have to wait & see. The entire thing did drain in the past when there was a leak. I might just call my well guy & ask him about coming out with the right fittings to convert it over to 1-1/4".
Last edited: Jun 14, 2019

Got home after dark, went out there with a headlamp flashlight. Wasps were asleep. Couldn't get the hose to bend enough to get it to fit with the shutoffs & really wanted my water back on. Pump guy is booked up for the next few days so I temporarily scabbed it. I actually found a 1-1/4" x 3/4" fitting in the store (that wasn't on the website). The pipe coming from the shutoff didn't break & I was able to cut it short enough to stick the adapter on, then I was able to put a 1-1/4" male threaded piece on it & crammed the hose on it, then I finagled the other end into place on the stainless steel elbow. It was a tight fit, but it went on. I did a dry fit before I used glue. When the pump guy comes out, I'm going to talk to him about moving stuff around- moving the pressure tank to another spot or just over enough that it's not in the way. Will require replacing some shutoffs and quite a bit of pipe, but the older pipes have gotten gunked up anyway. I'm not happy with the current setup, but it's better than nothing. Waiting the 2 hours for glue to setup now.

Update: Well, the steel pipes are not leaking & the PVC is not leaking, but the corrugated hose is leaking. I don't know if it's because it is compressed rather than stretched or if it is just defective & doesn't hold a seal well. Might have to eliminate it from the hookup. Still going to have the pump guy come put in a foot valve & install a new shutoff. It can either be a PVC or brass one, whichever he thinks would work best. Both shutoffs can be threaded directly on to the foot valve if need be. I wrapped the spot that leaked to try to reduce the leak, but I don't think it's going to have much effect. I'm disappointed but at least we have running water. It was already leaking from the pump so more leaking doesn't change too much. I also annihilated the wasps.
Last edited: Jun 15, 2019

So, the water was working last night after I flipped it back on after 2 hours. The holding tank is full, there is still a slight leak/drip from the hose, but it's not as bad. But this morning there was no water & I went out and checked to see that the primary pump is pulling water up to into the tank, tank is full, but there's a problem with the jet pump. I tugged on the electrical cable going to the little plastic box on the side of the pump & it turned on & ran. Then it started faltering & making some clicking noises- I could see blue lights flashing under the plastic-- like it's misfiring. It shut off awhile later so I tugged and it turned back on, but kept making the noise. Not sure what the problem is. Could it be that the water pressure isn't high enough to get it to work properly? The water ran fine & toilet flushed without the air-in-line sound. Could replacing the hose with more solid pipes help? I'm hoping it's not the pump that is shot. That thing is expensive.

The seller for the pump says the flashing lights (which are now green) means there's an electrical short. Still waiting to get ahold of the pump guy.

Goulds J10 shallow water tank. Not sure what sort of controller. It has a plastic box on the side with wires going into it. In the past when it had electrical problems, I had to push the wires down toward the box to make it work. I do suspect there might be a water pressure issue though. I think it has some sort of pressure switch so if it isn't detecting water it or enough water it shuts off.

I believe it has lights on the switch under the box-- I'll have to see if I can get a photo later. Still can't get in touch with the pump guy bc my landline is out & my cellphone signal keeps getting weaker out here. Right now the holding tank is low on water bc I shut the power off to the pumps hoping that the guy would be coming by & not wanting him to have problems with needing to drain the tank before he can work on it.

Should be just a pressure switch. Never seen one with lights flashing for a short? Picture would be nice.

I was going to get a picture but while I was setting up my mother's computer, the pump guy arrived & honked the horn out back so I didn't hear him. My mother heard it & asked my brother to check but he refused & she couldn't check. I found out about it much later when the guy knocked on the front door while I was going to check after my brother made some comment about Mom hearing things that weren't there.
He'd already completed the job without using any of my fittings. He didn't put in the foot valve, didn't put in a new shutoff-- looks like he just used the existing pieces I had on (an adapter going from the 3/4" coming out of the pump to a 1-1/4". So there is no shutoff before the pump. He had to remove the corrugated hose bc it leaked, & ran the PVC pretty much the way it was before (going up above the pump). He also put a check valve in on the suction side of the pump (the valve cost $125). I wish I'd gotten to talk to him before he did it all, but he was overheated & exhausted when he was done & I'd been cleaning & moving stuff so I was too. Didn't feel like arguing about it since it was already done & the water works.
He also replaced the pressure switch bc he said it was burnt.

Pressure switch and the wires to it got fried in a power surge. Fortunately, Tractor Supply carries it so my friend replaced it for me. Now the lift pump is no longer working. After the power finally came back (was out 3+ weeks after the hurricane) a bunch of breakers tripped and had red. Friend reset them & they seem to be working. Jet pump was humming bc there was no water in the cistern. Think the motor burned out in that piston pump. Trying to find a suitable replacement that can work with the current setup.
Any suggestions? Need something soon that will be reliable.
The current piston pump is 1HP.
I wonder if it's possible to get just the motor... My friend said he can replace it for me. 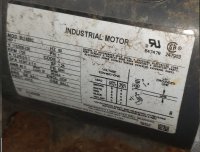