Not sure what is growing here?

Had a shower finished about 8 months ago. We started noticing a foul smell in basement and thought it was the pipes. Had someone out to inspect pipes and they are all clear. Traced the odor to the shower base and when we pulled back the rubber membrane we spotted this (see pic). The pic is taken looking down on the back of the shower wall where the mixer and shower head are located. It looks like the cement board has been sitting in water for quite a while. 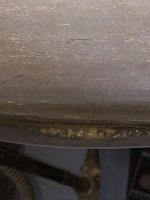 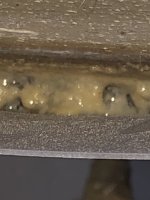 The original shower build took over a year as the contractor ran into issues with his tile subcontractor. The build was done incorrectly and a new guy came in to finish. That new guy was supposed to check to make sure no water had gotten trapped in the rubber membrane - he clearly failed that task.

Any way to resolve this without a demo and rebuild of shower base?

I can’t tell what I am looking at, no perspective.
Post some wider shots or something that gives an idea of the lay of the land in there.

Never mind, I can relate to it now.

Meanwhile, it looks like you should be suing both contractors in small claims court, probably time to rip it all out.
D

Thank you for the reply. I was afraid it was mold. I also notice when taking mor pic last night that the space still fills with water after using the shower so clearly they didnt even fix the drainage issue. I've given this guy three shots to fix this to no avail. RI has a state Contractor Board that is very responsive to resolving disputes as long as filed within one year of job completion. I think I'll have to go that route. Thanks again for the help!!