I have a downspout buried drain pipe that was constructed with 3" PVC having what I would call "slip joints" with a "bell" end of a few inches on each 10-foot section. The pipe is marked PWPipe PVC Sewer Pipe ASTM ....
One of the slip joints parted by nearly a foot so I'm moving one of the sections around a bit in order to rejoin at the "break" while adding a 22.5 degree bend.

I suppose I could wrap the loose joint with DVW wrapping tape but since this is buried, that doesn't seem too permanent.

Cut the pipe further back. Put the coupling on, street into the coupling and glue the pipe straight into the bell end. Or am I missing something? Will be a pain to get this to work since it'll be all hard piped with no ferncos.
J

Might throw a picture up. Pretty sure I know what your after but better to see than just imagine.
F

Here is the original "problem" the pipe on the left has a "bell" end which is barely noticeable.

Here is the final solution. More expensive in parts but they were available. Also, the needed bend was less than the 22.5 degree street I had so the ferncos were adequate. Also accommodate the fixed-gap without using a pipe stretcher.
F 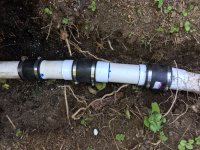