Here are pictures of what's currently installed in house.
Washer drain is 2" PVC, drops straight down to S trap, then to Wye.
I think this needs an AAV after the trap. 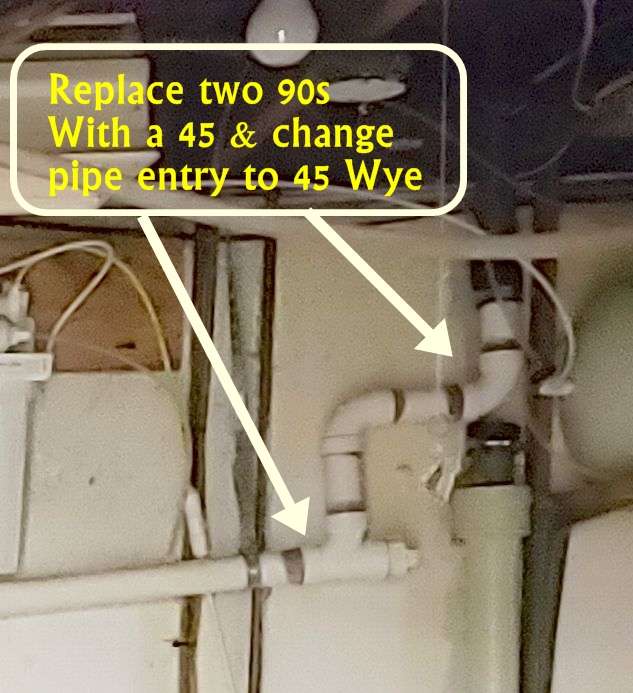 What else should I do to avoid backups?
You'll notice this drain line has three cleanouts.
(#3 not visible, only a few inches from stack)
When I first moved in, 1-1/2" pipe was sloped backward - G.D bless the *$%$#$# installer

What is that 1 1/2" pipe picking up. I would have a local professional in there that knows your codes.

Local code is ICC.
The 1-1/2" pipes are to kitchen sink (with disposer) since installing new disposer, have been having gurgling, slow drain. New disposer is an Insinkerator "Evolution" which supposedly double-grinds the waste, much finer than the old Insinkerator....and probably has smaller discharge holes in the grind chamber (?).

YES, have run a snake from beginning to end, but slow drain still happens intermittently.

In any event, the more I look at the installation, the worse it looks. Currently thinking to change almost everything.

(1) Raise the trap for the washer to 1st floor level, and turn it into a normal P trap, adding an AAV, since there's currently no air vent pipe for the washer. Then bring it pipe down into the existing 2" drain line.

(2) The drain for the sink is the original c.1960 1-1/2" galvanized pipe, air-vent is in the wall, the galvanized is age 60 or so, is full of rust. The original pipe fed into a 2" ? cast-iron drain that went below the slab.
That cast iron line apparently got so clogged that someone bypassed it, and installed the PVC kludge with the two 90-degree elbows, leading finally into the 2" PVC drain line.

Intend to re-pipe kitchen drain, bypassing the existing vent (since getting to that would be a job and a half) and again, add an AAC.

Will post a drawing of what I intend to install, and look for people's response. Shouldn't take all that much in time, or materials, but I think I'm going to need a to buy good PVC pipe cutter. 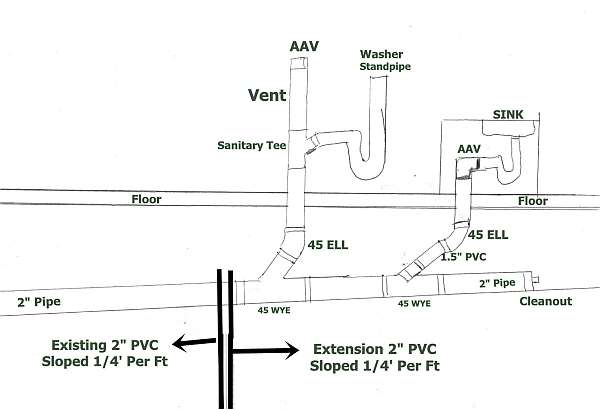 Change the pipe that is running horizontal to 3inch. Will help with better drainage.