I just went through a repair job on this faucet and wanted to maybe help someone in the future.

Our faucet is a Kohler Mistos Standad Single-Handle Pull-Out, model K-R72509. It was purchased in the spring of 2019. Recently, it started to automatically shut off, meaning when running but not at full stream, the handle would start drooping until it had shut itself off. For me, this happened mostly with the warm water setting.

I called Kohler, and they said I needed a new "bonnet kit", and graciously sent me one (no charge, under warranty). The instructions seemed pretty straightforward. After removing the handle, they said to "remove the bonnet". I tugged on it a bit, then started to wonder if it might be screwed on. So I did some Googling, never really found my exact model, but found many, many references to removing the bonnet on a Kohler faucet. EVERY single one I found said to unscrew the bonnet, and that it might need padded pliers due to corrosion, etc.

I struggled and struggled trying to turn the bonnet counterclockwise, and not mar the finish of the base. This bonnet is tapering upward already even at its bottom, so gripping it at all is difficult. Anyway, ultimately I discovered that the bonnet on this model does NOT unscrew, but instead must be pried straight off. So if you have this model, just take a knife with a long-ish blade, put it between the bottom and base (do it near the back if possible), and gently pry them apart. It will pop off.

Here is a photo of this faucet, so if yours looks like this, you may need to pry instead of screwing. 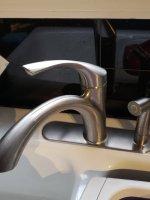