My pleasure. I hope it can help people who don't know what code is used in their area so people can refer to this as reference.

I'll try to keep it updated.

Effective January 1, 2016: Louisiana no longer has its own plumbing code. Instead, it now must adhere to the rules of the 2012 version of IPC.

Louisiana House Bill 1048 was signed by the Governor on June 23rd, 2014 and enacted as Act Number 836 of 2014. With an effective date of January 1st, 2016, this Act repeals the authority of the State Health Officer, acting through the Office of Public Health (OPH) of the Department of Health (DHH), to prepare and promulgate plumbing rules and regulations.

Applicable plumbing provisions of these codes, along with state amendments thereto adopted by the LSUCCC, will become effective January 1, 2016.

The International Codes can be assessed at: http://publicecodes.cyberregs.com/icod/index.htm

Louisiana amendments were published as an Emergency Rule in the December 2015 Issue of the Louisiana Register. These amendments can be accessed at: http://www.doa.la.gov/osr/EMR/1512EMR082.pdf

Beginning on January 1st, 2016, all plumbing systems will be required to be designed in accordance with the provisions of these codes, as amended by the LSUCCC. This includes new construction, reconstruction, and the extensive alterations or repair of buildings and other structures. In accordance with the Act, LDH will no longer have enforcement authority over the new plumbing provisions that will become part of the State Uniform Construction Code. Enforcement of such will be handled in accordance with LA R.S. 40:1730.21 which requires all local municipalities and parishes in the State to enforce the State Uniform Construction Code. This includes plan review, conducting of inspections, and the issuance, denial, or revocation of permits.

In addition, the new law amends the Louisiana Building Code (which governs the design of state-owned buildings) by removing compliance with Part XIV (Plumbing) of the State Sanitary Code and replaces it with the above referenced codes, as amended by the LSUCCC. Beginning on January 1st, 2016, the Office of Facility Planning and Control of the Division of Administration will be responsible for ensuring that state-owned buildings comply with these newly adopted plumbing regulations.
Click to expand...

I wonder if that means that AAVs can now be used again, or if they are still forbidden.
Last edited: Aug 6, 2016
S

Zanne said:
I was curious about which states follow which plumbing code and found this on the forums at terrylove.com and filled in and changed based on http://www.tests.com/State-Plumbing-Codes-License

Changes made to Louisiana plumbing code in 2013
Louisiana does not allow AAVs and the allowable distance from trap to vent in a 2" drain was reduced from 8' to 6'.

With the exception of Loudoun County in VA. They make the rules up as they go or if they need the revenue. lol. That and in WVA the weirdest thing is they do not require a Rough In inspection. They do it all at final. Go figure.
Last edited: Mar 22, 2017

Just noticed this list of Plumbing Code by State.
The code for Massachusetts is not the UPC.
Your source for the list shows it correctly as, "Uniform State Plumbing Code, 248 CMR 10.00".
Not "UPC, 248 CMR 10.00" as shown above.
Mass. has always had their own plumbing code.
M

Does the 2x distance have to be in a straight line?

In WA we use UPC 2015 I think, with various "errata" sheets and other addenda, plus whatever the AHJ feels like that day.

If I am understanding you correctly, it has to be in a straight line to accomplish its objective. Which is to maintain a space above the flow for air and avoid siphoning potential. 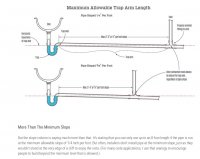 If you imagine a bend in that straight line, but continuing downward at the same slope, you have the same siphoning characteristics.

Mikey said:
If you imagine a bend in that straight line, but continuing downward at the same slope, you have the same siphoning characteristics.
Click to expand...

Like a drain going around a corner in the framing, but continuing downward at the same slope. If the developed length of that run and the drop are the same as those in a straight line, I don't see why the siphoning characteristics should be any different.
F

Mikey said:
Like a drain going around a corner in the framing, but continuing downward at the same slope. If the developed length of that run and the drop are the same as those in a straight line, I don't see why the siphoning characteristics should be any different.
Click to expand...

Oh ...I gotcha. Didn't think about it that way. Yeah it wouldn't matter, the same would apply if it was curve or straight. It's the total distance and resulting fall that matters. 8 foot distance at 1/4"/ft would be 8 x 1/4" or 2", the total diameter of the pipe, which effectively closes off the venting capabilities. It's 6 ft, in many cases, to make it conservative.
T

Mayo said:
? i am a Plumber in New Jersey and does anybody knows where can i get the app for the IPC . i have been trying to get it on line.....
Click to expand...

I believe this is actually the printer of all the code books and they are available as downloads as well.