Here's an annoying story. I had a drippy shower faucet. I figured It would need some new inserts, or maybe some seals. I can handle this kind of repair myself, but I'm trying to learn to hire people to do these kinds of annoying jobs so I can focus on other things.

I also will need a new water heater soon, and I'd like a whole house filtration system, so I decided to hire a plumber for the job. If they did a good job on the leak, I'd probably hire them for the other stuff.

As it turns out, the diverter was a miserable Glacier Bay, and they couldn't find the inserts available at any nearby Home Depot. They told me I can order the inserts and put them in myself, or they can swing back by to do it. I didn't want to screw around, so I asked them about replacing the whole diverter and adding some shutoff valves. They gave me a good price and left immediately to fetch the new Pfister Bedford 801-WS2-BD.

They struggled to put the thing in. It ended up taking them 4 hours. There's an access panel, but they were having trouble getting the whole assembly straight. They finally got it in, had their boss come buy to check their work -- i guess they had questions about putting in the valve stems. There was definitely some on-the-job learning that afternoon.

The next day I notice a tiny leak. A super small leak in the down stream solder joint for the cold water shutoff valve. I called them up, they came back out, and fixed it pretty clumsily by re-heating the joint and shoving more solder in.

Several days later, a Saturday morning, I realize there is a small leak now in the hot water shutoff -- the down stream solder joint. This one got progressively worse over the following hours so I had to shut it off. I called them up. They want to come fix it, but I'm not sure I want them anywhere near my plumbing.

So now I made an appointment with a new plumber, a larger local outfit with numerous good reviews. I plan to have him replace the piping they did and make sure the rest of the faucet is done correctly. 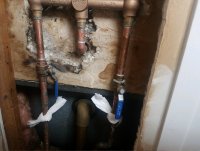 Yeh that stinks, hopefully this next co is better and will correct what wrong, if this works out, just think of it this way, you have found someone you can trust and your stress is low, hope it works out
M

There’s not a plumber in the world who has never had a leaky solder joint. The re soldering of the joint is not the approach I would have taken, but sometimes it works. By the sounds of it, it’s possible the pipe wasn’t cleaned well enough, it’s pretty rare for a new solder joint to just start leaking hours later. Generally if they don’t leak right away, they won’t.
If they take the joint apart and start over, they may have better luck

Sadly. I have seen a lot of this lately The reason I think is that the young plumbers are not well educated in soldering copper. they install pex all day every day and rarely see copper
They are not like we were back in the day. we soldered copper every day that we worked

I call these guys house jockeys not plumbers Just like the old dudes called us ice cream shoes for not installing cast iron and galvanized. LOL...
H

The new plumber used these copper crimp fittings. One of the trickier ones leaked, but I called and he came back right away and re-did it. The issue was that the pipes weren't aligned, so the one union was torqued. He replaced it with some angled fittings. I keep checking for leaks....

This story was captivating, but it really needed pictures to sell it.
H

There you go, Jeff. I added an image of the leaky valves.

I don’t see any blocking to hold pipes or valve in place.
Maybe it’s higher up.
Otherwise, have next guy address that.

Looks like they went pretty heavy with the solder on the shutoffs.
I hope it did not run down into the valves, you should test them both to see if they operate and fully shut off both hot and cold.
H

I was thinking about that. The second guy didn't add anything, he just removed those valves and put in some new ones using those copper crimp fittings. How should this thing be anchored?
You must log in or register to reply here.
Share:
Facebook Twitter Reddit Pinterest Tumblr WhatsApp Email Link