It is sideways? This thing will sew anything leather and your finger also

That Macgyver name is sure fitting sometimes!

That is so cool!

Make a video of it actually sewing leather. Maybe I'm not convinced.

was i supposed to convince you?

That is very cool! Nice thick piece of leather too. I'd love to learn how to sew leather. Although, I sew things by hand because I'm not good with sewing machines. I haven't used one since 1989.

frodo said:
was i supposed to convince you?

That thing is a beast!

I bet you could make leather masks with detachable cloth inserts & sell them. Could find a flexible metal band for the nose bridge to allow it to mold to the shape of a person's nose bridge and cheeks, use a bit softer leather with some vents, and have the cloth inside work as masks. Would make a bada$$ looking mask. I saw some on Wish but they didn't have cloth linings or just looked poorly made. I need to re-learn how to use a sewing machine. 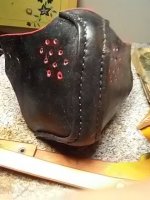 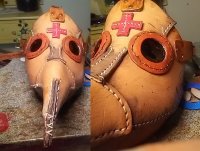 That last thing is straight up freaky!

Yup! Although, something that is more flexible over the nose bridge would be cool.
Reminds me of this one: 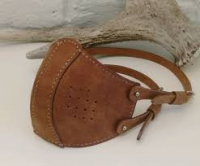 This is a more steampunk style

This style isn't bad either 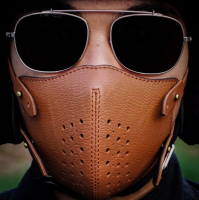 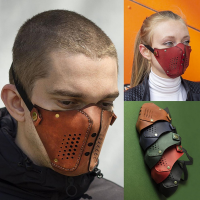 This one is just funny

These ones are neat. They have a detachable insert to cover the vents. It attaches with velcro. 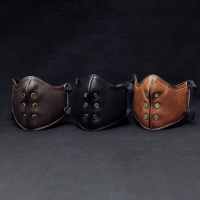 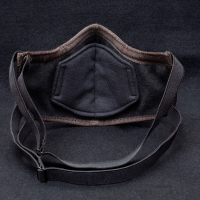 I want to learn how to make my own and have the metal flexible piece for the nose bridge (I think I mentioned that). Not sure where to get that metal piece. I thought about stopping in to Hobby Lobby or Michaels the other day but parking lots were packed & I don't like being around a lot of people (nothing to do with the pandemic-- I've never liked large crowds). The suede type one would somewhat match my best friend's jacket. I want to get him a mask to match the jacket, boots, and gloves I got him. Also want to get him an eyepatch for his left eye (since he's now blind in it & it bugs him).
EDIT: Found the nose bands for masks https://www.amazon.com/Bridge-Strips-Aluminum-Adjustable-Accessories/dp/B08869RGMK
and https://www.amazon.com/Mr-Rex-Washable-Adjustable-Accessories/dp/B088NGZPWN/

Is it difficult to sew cloth and leather together?

Havasu, last one Frodo posted is a Plague Doctor mask. They were first observed in the 17th century in France and Italy. The beak contained lavender or sweet smelling "protective herbs". It was thought to filter out diseases to protect the physicians, but I suspect it was also to cover foul body odors from patients. It was part of a full body protective gear including a brimmed hat and very long coat.
Last edited: Jan 19, 2021

Is it difficult to sew cloth and leather together?
not really, but getting he tension on the thread is a pain. you are sewing 2 things, one wants a lot of tension and the other wants just a little

you like steampunk?
here is the light over my machine
the socket without a lamp shade is the on/off switch 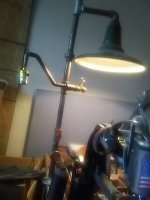 I'm really hoping this full mask thing will go away soon, and we won't need these designer covid masks!

They aren't just for Covid. It's nice for winter. And so you can silently curse people out without them knowing you're moving your mouth.
My friend likes having to wear masks bc his teeth broke in the wreck years ago & people are rude to him when they see his teeth. They are much nicer to him when they can't see them.

Frodo, the mask thing didn't want to load properly. Not a format my computer recognizes. Edit: Nvm. It worked now. Was pdf and I got it to open. Thanks!
Good point about the tension for different mediums. I always sew by hand so I don't have much experience with the machines and fabric tension.

frodo said:
was i supposed to convince you?

Yes. And I thank you for the video. It's impressive that automation can perform a seemingly organic task like sewing leather.
Additionally, machine sewing is a place where gender-attached tasks overlap. Sewing is traditionally women's work; whereas, machine operation is often thought of as a man's domain.
Incidentally, when I used the first-person pronoun, "I", I meant it in a general sense. That is, I meant "the reader" could benefit from a video.

I need to figure out how the metal strip for conforming to the nose would fit on the mask pattern. I think I have an idea though. Also, I read some reviews on the links I posted & people said they found getting a bag of coffee or cookies with those metal strips that are used to close the bag & using the strips when done with the bag is better than buying the strips. LOL. I need to see if I have any of those. Would be nice from a coffee bag bc it might have the nice coffee smell.
I'm thinking softer leather would have to be used to be able to have a flexible strip. And could add on some cushioning at the top to keep breath from coming out the top of the mask and fogging glasses. I described the mask to my friend and now he wants one. LOL.
I showed him the picture of the one you posted, @frodo, and he loved it. I'm going to get some ink in my printer to print out the pattern, figure out a lining. I'm thinking he can ninja an old bra padding from one of his ex's bras for the detachable lining. Coffee or cookie bag strip to make the nose part conform. He wants elastic bands that go over the ears. I tried to find out if he likes the rope kind or flat kind but he's high as a kite from pain meds & didn't respond.

Thank you so much for the pattern and info! I think I might have some leather lying around somewhere... Got leather off an old couch down at the workshop. Might need to dye it though. Also had some scrap leather from hobbylobby somewhere (just have to find it). I think I'll make one out of scrap cloth first, then I can try with leather. I want to make a brown one and a black one.

Adding, I googled the creator of the pattern to see if there were instructions. Found this video:

@frodo, I noticed you have some red poking through on your mask. Did you add a liner? Sorry for hijacking this thread, I am very fascinated with the masks you made. I think even my monkey self could possibly do saddle stitching. LOL.

That is Tony at steampunkro watch his videos on Youtube..HELLof a nice guy.
He is who i get my patterns from. and I email him with questions and bug him to death LOL
A dyed the holes red
you can do it, I know you can
PM me ANY address, does not have to be yours. can be anyones. I will send you what you need to make a mask
I am WARNING YOU...Leather is addicting. It will be your crack,

Thanks, @frodo! Those are so cool.
Tony seems like a nice guy from the video. He made sure to explain everything very carefully & he had the right angle that I could replay bits to see what he was doing if I blinked & missed it. Saddle stitching is something I will have to practice.

I saw another video:

He made a detachable liner. Although, I would have sewn the snaps on before attaching the side bits and hidden the thread under the side parts. I have some leather from a craft store but it's pretty thin. I also need to check the couch seat leather down at the workshop & see if it's still any good. I'm debating between sewing some sort of liner in for comfort or having it completely detachable (but with more points of contact than the one in the above video).

I was thinking of either cutting a separate strip of leather to fold over the top (similar to how the side pieces were folded and attached) and have a flex band in it to get the mask to conform to the face OR I could leave the top leather a little long and fold it over as sort of a hem but with the flex band inside. Another option would be to take some cloth that doesn't stand out too much from the leather and that is comfortable to skin and sew it on. I wonder if I could just glue felt or some sort of cloth on the inside just for lining and then have a detachable lining. I discovered there are washable absorbent bra pads for breastfeeding women that are about the right shape and size for a detachable piece.

The detachable lining in the video is a bit sloppy. I would want to have it fit better- plus I want the flex band to contour to the face. My friend wants elastic loops that go around the ears & can be adjusted.

I need to get some printer ink to print the pattern (ink costs almost as much as the damn printer). It's refusing to print in black ink bc it's low on cyan or something (despite me selecting "black and white" for printing).

For the removable pad, I want to sew pockets on to the part closest to the vents/holes and slide disposable filters in. That way there's extra protection. I figure an absorbent pad designed to be against sensitive skin won't be so bad touching someone's face. LOL. But, I could be wrong.
Last edited: Jan 23, 2021
You must log in or register to reply here.
Share:
Facebook Twitter Reddit Pinterest Tumblr WhatsApp Email Link