I have a single handle Price Pfister Avante single handle valve in a shower. The handle turns right/left to adjust temperature and moves in/out to adjust the flow. The handle can be moved about 1/2 inch in and out of the fixture. This shower was rarely used but worked in the past. Recently I discovered that there was very low flow from the shower head, even with the shower head removed. The max flow is probably about 1 cup a minute. This valve has another output consisting of a capped pipe nipple coming out of the wall below the valve. (I have no idea why this is there.) I tried moving that cap from the lower to the upper outlet, but the flow was same from the lower output. I've tried blowing compressed air into both outputs with the cartridge removed and also tried replacing the cartridge. Nothing I've tried helps. If I remove the cartridge and turn water on to the house, tons of water comes out of the valve body, so there doesn't seem to be a water supply issue. Any one have any ideas?
T

Although I don’t believe the Avante is pressure balanced.

Use only factory Pfister parts. No knockoffs.
T

Thanks for the reply.
Both hot and cold are present. I'm not sure what brand of cartridge was in the valve originally, and worked at one time, but the Danco I tried looked and worked the same.
T

Use compressed air attached to the shower arm with the cartridge removed.

If that doesn’t work, replace the faucet.
T

Thanks for the input. I've tried the compressed air trick with no luck. The pathway from the valve body to the outputs seem clear. I am not sure if the original cartridge, that worked ok at one time, was a Price Pfister model or not. I am not the original homeowner. This shower was built probably around 1980.
T

Will do, thanks
T

Installed a factory cartridge and the flow didn't improve. Any other ideas? Unfortunately replacing the entire assembly isn't a good option since this was installed in a ceramic tiled shower on an outside bricked wall.
T

If you’re getting hot and cold out of the valve body without the cartridge installed and the shower riser is clear and open then I don’t have a logical answer for you.
T

Can you take a picture of what you have. The pipe below the faucet is usually for a tub spout. It sounds like the ports in
the body are plugged.
T

Attached are photos showing the cartridge installed and handle removed. I agree that the pipe below the valve is usually for a tub spout, but don't know why it's even there for this shower stall installation. 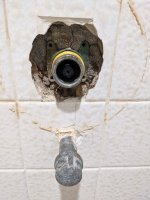 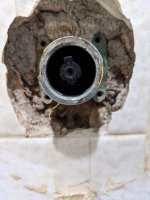