GO THROUGH THE CAP! THE SNAKE WILL NAVIGATE THOSE BENDS, EASYPEASY. stop thinking too much. You can do it.
A

frodo said:
replace it with a pvc threaded plug.
Click to expand...

This is ok?...haven't heard this from anything I come across in my research. I pretty much figured I would replace a brass plug with a brass plug. Being able to replace with a PVC plug does provide more options.


frodo said:
you are going to play hell getting that snake around three 90 degree turns
Click to expand...

This is what I figured as well...based on my experience with non-powered metal snakes. Thanks for mentioning.
A

RenewDave said:
GO THROUGH THE CAP! THE SNAKE WILL NAVIGATE THOSE BENDS, EASYPEASY.
Click to expand...

I know you keep saying this (easy-peasy)...but the power snake navigating all those bends seems like a lot. Seems like a recipe for a lot of kinking up of the snake.
A

Diehard said:
Well you found an excellent example as to how NOT to back fill around a buried pipe line.
Click to expand...


Diehard said:
Secondly, as you already suspected based on some of your previous comments and concerns, DON'T get too carried away with smashing that cleanout plug.

You may be alright with smashing it but who knows how that may affect the integrity of that leaded joint, etc.
To be safe, you could very easily drill (or chisel) a series of holes around that nut to allow you to remove it with less force. Then cut towards the threads in a couple of places to allow you to collapse edges to allow you to crush the perimeter of that thread quite easily.
Click to expand...

This was pretty much the plan I was going to go with.

I've tried the big pipe wrench again with no luck...and I know I could probably slip an extension on the pipe wrench for more leverage...but I'm concerned about putting too much torque force on the joint...since it appears to be a brass cap in an adapter that's "leaded" into the larger diameter cast iron pipe.

I was going to try using a chisel and hammer around the threads on the outside of the brass cap...and if this doesn't work...I'll drill a bunch of holes in the brass cap...then use a Dremel/jigsaw/hacksaw to cut some of it out...and carefully remove the rest with a hammer & pliers.

I've got almost 40 years experience working on my own cars...many of them older models when I've owned them. And with older cars there's always lots of rust & corrosion...semi-brittle rubber parts...etc.

What I've learned regarding removing old fasteners (nuts, bolts, screws, etc)...using the least amount of force necessary is usually the best method...then you don't strip out or snap off bolts nearly as often. AKA...don't use a 1/2" drive ratchet...when a 1/4" drive ratchet will work.

I don't have nearly as much experience working on plumbing projects (which is why I'm being super careful). Many techniques from working on autos can apply in a lot of plumbing situations too.

Thanks for the help.
A

Apologies guys for taking so long to reply with how things went. I know how it's nice to get a conclusion to projects.

Where we left things last was...I was at the point of removing the clean out cap...then seeing if I could figure what the exact issue was with the backup. I tried various methods to remove the clean out cap (large pipe wrench, hitting around perimeter of clean out cap with a hammer & cold chisel, liquid wrench & tapping with hammer everywhere)...nothing was working.

This left me with two final methods to try...hitting the clean out cap hard with a big hammer to break it...or use a combination of drilling, sawing, and lite hammering). I chose the drilling/sawing/lite hammering method...since this seemed to be the least risky in terms of doing damage to parts that were not going to be replaced.

Before doing any clean out cap destruction/removal...I already had two replacement caps (plastic & brass), and plumber's putty so I could replace things right away. Basically I drilled a bunch of holes...did some cuts into the clean out cap with a jigsaw...and some lite hammering to remove the old clean out cap. 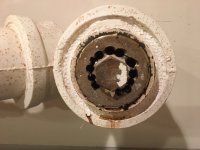 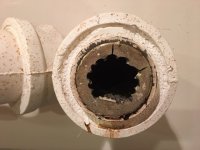 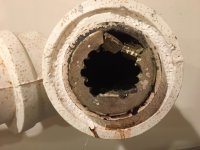 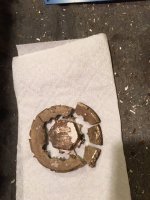 But I can see how with the much more cheaply made/thin newer brass clean out caps...how the big hammer method could have worked.

After getting the old clean out cap removed...with a strong flashlight...I could see into the pipe & could see standing water about 3-4 feet from the clean out cap. Remember the route of the drain pipe goes straight-out from my home's foundation about 7-8 feet towards my neighbor's house...then takes a right angle towards the street for about another 80 feet. Since I had one of those small 25 foot snakes...I thought I would try this first (before renting something larger). I got to about the 20 foot mark with the small snake...and it seemed to hit something (I did this 2 times)...so I decided to go to the local Home Depot...and rent one of the 100 foot power snakes. 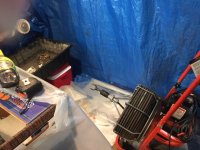 Long story short...I ran the power snake thru my homes sewer drain pipe about 4 times with different tools/tips on the end of the power snake...87 feet all the way to the street. At no time did I ever come across any roots (nothing wrapped around the tip of the snake or the snake itself)...so I'm really not sure what was partially or fully blocking the pipe causing the standing water in the pipe. But after running the power snake thru the sewer pipe 3-4 times (with different tips) 87 feet all the way to the street...the standing water cleared from the pipe...and all has been fine since. 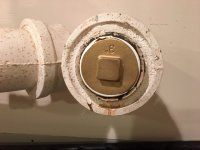 Not a fun job...especially running a power snake inside the basement spraying sewer "juice" on the tarp covered walls...but definitely needed to be done...and I learned a lot in the process.

If my some remote chance you have a desire to upload photos you should simply upload directly from your computer or device.
A

Diehard said:
If my some remote chance you have a desire to upload photos you should simply upload directly from your computer or device.
Click to expand...

This is my preferred method for including photos in forum threads...but the forum software settings do not allow for this...when the "image" icon is clicked on...the only option given for a photo is via URL. Thus the photo needs to be hosted on the internet.

Yes the "Upload a file" button works...but not as "pretty" as having the photo actually embedded into the post.

I'm I missing something? Less resolution? 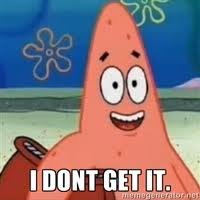 Ok...I figured it out. When the "Upload a file" button is clicked on...I didn't see the "Full image" button (which works the way I would want it to.

But just for discussion sake...many internet forums when you click on the insert "image" icon on the tool bar (which is what I was trying to do)...(photo 1) usually gives you the option to upload an image from a computer...but when the insert "image" tool bar icon is clicked here...this is what's seen (photo 2):

But I figured out what to do with the "Upload a File" button (as can be seen above).

All your pics that I see are clean and clear.
Good quality, well lit, and nicely framed.

So keep doing whatever you are doing, your images are already better than most others.
A

Jeff Handy said:
All your pics that I see are clean and clear.
Good quality, well lit, and nicely framed.

So keep doing whatever you are doing, your images are already better than most others.
Click to expand...

Thanks. Originally they were fuzzy/blurry due to the photo hosting site...but after figuring out how to upload them in a different manner...replaced them last night with clear versions.

I thought they were replaced. Much better.
A

Or your eyesight suddenly improved...like you were 18 again! Lol