I was doing some home improvement and the phlange under the toilet was completely corroded where the screws were so I started taking it out and the stuff between the phlange and the iron drain pipe just didn't want to come out.

I have managed to get some of it out and it's a metal, soft enough for me to punch through with a hammer and a punch pretty easily and I think it's lead.

How do I get this phlange loose from the iron pipe if LEAD is what's holding it together?
G

use a hammer and chisel a few good whacks on the flange should do it another way is to drill out the lead and oakum you will have to reinstall in a similar way...if you don't know how to pour a lead joint there is "lead wool" you pack the oakum in beteen the flange and pipe as tight as possible packing it down frequently wraping the oakum around the pipe leave about a quarter inch or so before the top then you pack the lead wool in as tight as possible with hammer and chisel the lead holds the oakum in
normally you would have the correct plumbing tools but if your not a plumber it will work with a chisel screw the flange down with ss screws in multiple spots.....your other option is a pvc flange that secures to the inside of the pipe they sell them at home depot
V

Yeah I think the PVC route is the way to go... pouring a lead and oakum joint should only be done by a plumber
J

Not even plumbers should be touching lead. This is 2018. Pvc. Primer an glue.
V

Don't be so quick to shoot the PVC gun... the world is much bigger than the jobs you work on there's a whole world out there where you can't use PVC and it's still illegal and cast iron needs to be used. Where there are terrazzo floor sinks in Janitor's Closet that still need to be connected with lead and oakum joints. Or a multi-story skyscraper who's housetrap is connected using lead and oakum. Not everyone is a plastic plumber..

We use lead wool and oakum. I have a thread on how to some where. I'll go find it

Some tips to remember
Careful drilling out the old lead. The gap tappers and you might break a drill bit or two.
the closer you make the holes the easier it is to peel out.
After I set the flange and packed it with oakum I poured quick set cement around the hollow to lock the flange in place. Works on a slab.
On a wood floor I slide 4 FHA straps under the flange to hold it up while I pound lead.
Last edited: Oct 21, 2018
T

We have a Mall in our town that you can only use cast iron pipe. Luckily its no hub with bands. It was fun to once and a
while pour a lead joint. In those lead joint days I think you would of had to have a strong back for what the plumbers had
to do.

I use lead wool and oakum on ABS shower drains also.
Seen to many of those neoprene seals fail.

When I can I set the flange on tail piece before I install the flange to shower pan.
I use a piece of 3" pipe to hold the flange.
I stuff a little oakum around the bottom of the 2" tail piece to keep it squared and centered in the 3" while I pack the joint.
carful not to over pack it. I have distorted the ABS occasionally

Those bolt on closet flanges fail often.
I've seen a few that held on pretty tight, But seen more fail than not 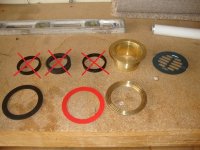 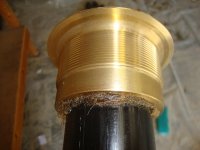 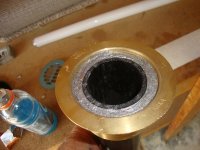 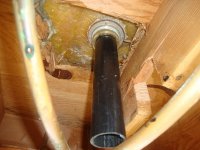 I was actually just trying to remove the lead, but it is too much for me as an amateur.

I will break everything off to floor level (concrete slab) and put one of those pieces in that fits into the interior. The output from the toilet will still be smaller than the hole after the new phlange goes in.
G

Phicksur said:
I was actually just trying to remove the lead, but it is too much for me as an amateur.

I will break everything off to floor level (concrete slab) and put one of those pieces in that fits into the interior. The output from the toilet will still be smaller than the hole after the new phlange goes in.
Click to expand...

if yourdealing with a concreate slab you ARE limited as to what you can do home depot sells a stainless steel ring you can screw it down with tap cons then use a wax ring with a plastic horn...you should be ok that way
J

Come on now. Y’all use lead on residential plumbing still? I knew pipefitters still used it. But here a pipe fitter will bust me square in mouth with a 36” pipe wrench. Just for calling them plumbers. It’s a toxic metal and should be treated as such. I assume the questions are from homeowners working on their stuff not a ceo worried about pent house mop sink. I just trying to stream line the answers. 14 responses bunking pvc and he calling a plumber now. Not a pipe fitter or boiler maker