How do I remove this from tub drain?

Hi - this basement tub has occasional sewage backup and I want to either install an insertable backflow valve or allow a tub stopper to be inserted after it drains. Problem is this crossbar which holds the screw to the drain plate. The bar is well attached, see the image. Any ideas on how to remove this? It won't budge. Thank you - 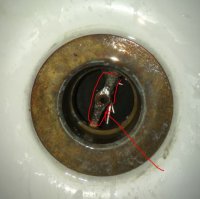 You are approaching the problem the wrong way.

Fix the cause of the backups.
A

Already had sewer guys in, older house, house sewer is under the concrete slabs and not good grade, seems to have settled over time. Not going to rip up concrete floor along half the house in the finished basement. Other option was to run a new house line just outside of that bathroom exterior wall, grade it better (if possible) to the main which could cost $5K. First need to get an engineer in to see if we have the grade or not.

Ideal cheap solution is either this backfill drain (I need a smaller version) like this on Amazon or a plug.

Corking up the drain opening will not work.

You will still have a river of crap trying to find that easiest and lowest way out.

Eventually the tub overflow will start oozing crap, or the sewer lateral will just plug up and nothing will go out to the street.
Toilets will not flush.

Pulling a toilet and snaking through the settled “belly” twice a year, or as needed, should keep you in business.
Get a second opinion on sewer line condition under the slab.
A

We've had it snaked and put a video camera down it. It's clean. Not tons of sewage, but enough to gross you out.
A

I should add that normally the tub drains very well and the toilet flushes fine. Both toilet and tub on a Y connector which then goes right into the house main just a few feet away.

dremel with s cut off blade, then grind the nub smooth with a stone

but..NOTE once that is done, to remove the drain will require the tub to be taken out of the hole
A

If you use the tub only for showers, then it would help if you occasionally fill the tub all the way up with hot water, then drain it, which will help to scour out some of the crud accumulating in the low area of the sewer under the slab.

And give the toilet an extra flush or two after a poop session, to help break everything up, and move it down the line.
Yes, it wastes water, but better than busting up the basement floor.

If you can access the other side of the wall that the drain end of the tub is against, then you should be able to access the drain assembly. I believe there is a large nut that you can access from the bottom of the tub and, when removed, lets the top piece (the chrome part) be lifted up and out of the tub. You may need to remove a part of the drywall to get to it.

frodo said:
dremel with s cut off blade, then grind the nub smooth with a stone

but..NOTE once that is done, to remove the drain will require the tub to be taken out of the hole
Click to expand...

When you unscrew the drain cover from the tub, you are removing the part that clamps the tub drain shoe to the bottom of the tub, from underneath.
And there might be some stored tension in that drain shoe, which can cause it to shift to one side, or pull away from the bottom of the tub.
And then the rubber seal under the tub can shift or crack or deteriorate.
So unless you have access from behind or underneath to fix that, I would not remove that part.
A

@Jeff Handy I don't have much of a choice and I don't have access under or behind the tub without removing tile or the tub. Will the rubber seal fall automatically when I remove the drain cover?
And if it did, would plumber's putty provide a good enough seal to prevent leaks?

I think plugging the drain, and screwing up the drain flange, and possibly ruining the tub drain seal, are all bad ideas.

Better to spend money having the drains or sewer lateral under the slab snaked as often as needed.

If you try to rely on a plug in the drain, either it will fail, or the sewer line will really fill up and become a solid mess.
In my opinion.
Which is not professional.
But I have encountered almost that exact scenario several times.

A customer who had me install one of those automatic drain plugs once called me in a panic.
It was a self sealing type of floating plug that protected a floor drain in his basement.
He was standing on it, trying to keep a river of **** from oozing out.