My first post here. Desperate for some help or suggestions on a tank seal, PLEASE! I am beginner DIY'er for small projects, have installed 5 complete repair kits so far for my family and friends with all 5 toilets working fine. However, on the 6th repair kit, this one is for my house, it turned into a total nightmare- The tank seal won't seals for more than 15 minutes. After the initial installation I checked the toilet for leaks several times within the first 10 minutes of turning the water valve on. There was no leak so I went to bed. The next morning I woke up to a silent slow leak that flooded the second floor carpet and saturated the first floor drywall ceiling! Ugh. Dealing with the water damage is a whole other story... Anyway, I took the toilet tank off and found that the seal wasn't centered judging by the indentation. So I bought another seal to install, this time I was extra extra careful and the same thing happened- it leaks after about 15 minutes. Could this be happening because the opening in the Crane toilet is off centered? If so, is there special technique to handle this? I also noticed that the original black color seal(shown in photo below) is much thinner than the new red color seals for the repair kit. Please have a look at the photos below.

Any help would be greatly appreciated!

Thank you in advance for your time.

Opening not centered. This is common? I think is might be the reason for uneven sealing. I also that ridge is not helping to seal... 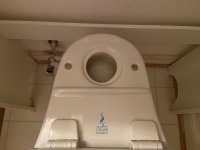 This is how the seal looks. The uneven compression on the seal is shown. I think the leak is from the corner of seal that was pinched and slightly torn. 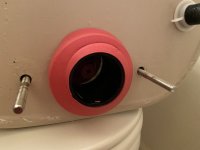 Same occurred on the second seal. Off centered and torn. Leak. 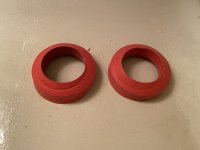 I drugged up the original black seal from the trash and saw that it too was off centered but that enough sealing area. 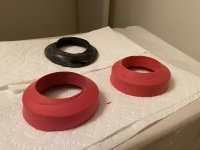 And the original seal was also much thinner (original black seal 7/8" thick vs. 1-1/4" for the new red seals). 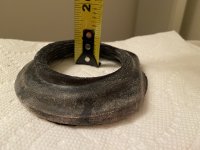 you may have a cracked tank

The only time that would leak is when the toilet is flushed. Your leak may be from the flush valve gasket inside the tank.
T

johnjh2o said:
The only time that would leak is when the toilet is flushed. Your leak may be from the flush valve gasket inside the tank.
Click to expand...

Thank you. I'll check it. I did noticed that the old flush valve gasket is wider than the new. With the 2" flush valve going onto the 2.7" opening in the tank a wider flush valve seal is a good ideal. 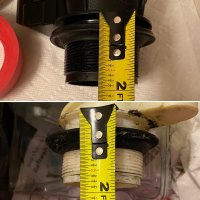 For anyone who is encountering this issue, I talked with a Fluidmaster tech on the phone after sending the photos. The tech said that the red tank seal included in the kit is incompatible with this model toilet. Red gasket is too bulky for this model toilet causing the tank and the two bolts to misalign thus not seating/sealing correctly. He recommended that I order the original spec gasket from the toilet manufacturer.
G

It’s obvious to me the bowl kinda wonky where that gasket sits.

Thank you for your replies, they were helpful. Here's an update:

After another attempt with different parts, there has been no leak so far. The lesson learned for me as a novice DIY'er is that one cannot always rely on the parts that come in the universal repair kits to work as intended on all toilets(It worked fine for me 5 out of the 6 times). Posting the following details for any DIY'ers who may encounter the same.

The first different part I got was a tapered flush valve seal for this a poorly made cheap tank. The "flat" seal that came in the universal kit would have worked good had the tank surface be finished flat. In this case the tank surface was bumpy and poorly finished so a tapered seal works better on this tank be sealing around the edge instead of the surface. The original seal was tapered, so I think the manufacturer knew that the flat type seal won't seal as well on bumpy surface. I am not a pro so I didn't even think/know to check the tank surface. 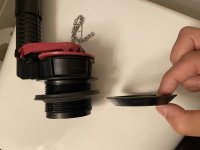 The second part was a different tank-to-bowl gasket kit. This kit came with a different gasket that's closer shaped to the original gasket, notably the to taper angle is different to clear the ridge on the bowl. 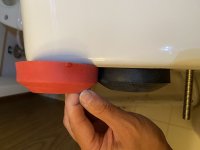 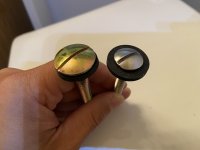 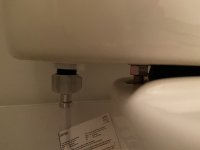