New member here with a situation I am hoping for pointers to resolve my problem.

I have lived here for twenty years, 50's low bidder built ranch house, slab floor.
Until past year or so the hall toilet would nearly overflow after a flush only a couple times a year with daily use.

Now several times a week it is doing same.
If left alone for hour+ level has returned to normal and a flush is fine.
During a trouble episode I can put about 4-5 gallons in tub and pull plug which results in water level rising in toilet and substantial gurgling and bubbling in toilet.
Once tub quickly drains, it will pull most of water out of toilet.

Sometimes I can flush immediately after above procedure and it will flush normally while other times will rise high and take a long while to return to normal.

There is a cleanout directly behind toilet outside and I have rented a snake twice and never encountered anything.

I tried to snake the vent but it must tee or something as I hit something hard about 3-4' below roof.
I had a hose up there and ran a bunch of water down it.

Lately we have made a habit to flush toilet before setting down and prior to flushing to open faucet in sink as flushing.
Seems to make no difference.
Been very frugal with 'the paperwork'
Nothing seems to make a difference

Will be immensely grateful for any ideas out there on where the problem might be lurking.
G

Geofd said:
have you tried a toilet auger????? the correct way to test a problematic toilet is with toilet paper....after hopefully clearing the toilet always test 5 flushes with toilet paper
Click to expand...

What is a toilet auger?
How is it different than snaking the drain from behind toilet to the exit? 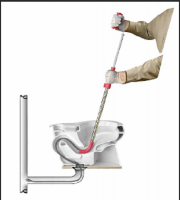 then it sounds like its more than your toilet,so if you are familiar with using a snake remove the water from the toilet bowl and tank...remove the toilet and snake from you toilet flange

Sounds like something longer than a typical toilet auger may be required.
Also, if tub drain is drawing toilet trap, may be a venting issue.
L

Diehard said:
Sounds like something longer than a typical toilet auger may be required.
Also, if tub drain is drawing toilet trap, may be a venting issue.
Click to expand...

That is kinda what I am thinking but don't know how to diagnose.
I can't snake it and have run a bunch of water down from roof
And it is intermittent
R

Hire a jetter with a camera.
L

Solved
My new hero, a plumber, came by and ran a camera into line.

In the process of digging up the section with the flaw