Menu
Log in
Register
Install the app
You are using an out of date browser. It may not display this or other websites correctly.
You should upgrade or use an alternative browser.

Agreed, Valveman. I think it is only acting as a junction. I suppose someone did that to avoid having a 3-way splice in the junction box.
Photos of the wires on the switch:

Yeah looks like someone just pulled power off the pressure switch to go to the compressor pump.

Last night I heard the pump running again and cistern was overflowing. Block has shifted even more and the lever was jammed hard. I had to use quite a bit of force to move it up and the switch sparked when I did it. I'm going to need to get this taken care of asap.

I'm trying to remember everything I've decided: Float set to NC with contactor NO. Incoming wires will have to be in a junction box and need to split off to the jet pump and the others to the contactor and then to the float & other pump.

I'm thinking of using these connectors because they are insulated and look like they might be easier to deal with. I'd have to run a longer 10/3 cable in, but that is ok. 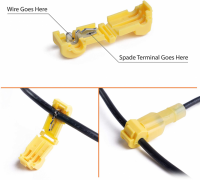 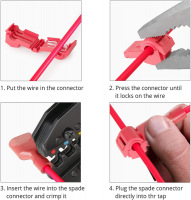 Note: Red wire would most likely be white wire but it shows up better as red for the purpose of the drawing. It would be the one going to the "neutral" part of the contactor.

Do you think this would be ok?

As an addendum, mfr said the little clamp thingies are rated for 400VAC (but preferred range is 300VAC / 30DC).

The belt on the air compressor pump broke. Markings on it said it was 49". Took the old one to O'Reilly's and my friend's uncle (who works there) found one that seemed to match. Brought it home & put it on. Turned the power back on (since I turned the power off as soon as I realized the belt was broken). Smelled something burning and it made a horrible noise. Thought the burning was the jet pump. Turns out it was the new belt. Got my friend out & he compared the belts. New one was about an inch longer. Went back and got a 48" belt. Friend put the new one on (had to take the wheel off the motor end to get it on). I'm not sure it's on tight because it sticks out a bit. Started making a loud clacking noise before it did it's usual noise. The motor is shaking pretty hard now. Friend said he thinks the piston end is causing it. Said he thinks it needs to be replaced. I wonder if it just needs to be oiled. I hope it will hold up long enough for us to figure it out. I noted the wheels turn clockwise. I think it does push air rather than pull. I wish I could find some other setup. Something that will push air more efficiently and not break down. I'm hoping the well service guy will call back so I can have him check it before it breaks. IIRC, the whole pump was over $700 a few years ago. I can find the motor part but no idea on replacing the other part.
R

That sounds like a very strange way to get water out of a well, why? Is there too much abrasive silt to use an ordinary pump? I would think you could use a shallow well pump if the water table is high enough or a submersible if it's deeper, unless there's a lot of silt.

RS, I don't know about silt, but there is a lot of sediment. It is an odd way, but I don't know how to change it. The pipe that goes underground is too small to fit any pumps I've ever seen. At least, the pumps would not be able to fit in the hole. My well service guy got grandfathered in & said he didn't know how to change things up. Unfortunately, I suspect his father may have passed away. A few years ago the old man had cancer and was not doing well. Mr. Show used to be very good about calling back and responding but he isn't anymore. I hope he's doing OK.

Any thoughts on how I could have a secondary sensor or something to tell the jet pump not to run if the cistern is empty? It was trying to run when the other pump's belt was broken.
I want something as simple and easy to set up as possible.

Water level would be much lower than shut-off for the other pump of course.

A pump down float switch at the bottom of the tank wired to the pressure switch will work. You can also use a Cycle Sensor to protect the pump from running dry without having to install anything in the tank.

Thanks, Valveman. The well service guy came out and tightened a screw (refused to charge) and told me the motor shaking on the air compressor pump was normal. Said there were two pieces of rubber that allowed it to vibrate without vibrating the whole stand, but he tightened it so it didn't shake so hard. Pump wasn't making the clanging noise and he said it was fine. He said sensors for low water to tell the pump not to turn on burn up too fast and that he's never seen anything other than the type of setup I have for these systems. I still want to switch to a cable float instead though. I can't even find the replacement switch of that type anymore. I still want to have something to protect the pump from trying to run when water is out, but as appealing as that device in the video looks, it seems too complicated. I don't know how long it takes for the cistern to refill or know about other parameters. I want to keep things simple (although I still want a CSV and smaller tank eventually.

Will it trip off again if it senses there is still no water? Sometimes there is no water because something has gone wrong with the other pump. Although, at least I haven't had problems with the wires frying since I went to 8awg for that pump.

I'll have to think about this some more when I'm not having a terrible week and a massive headache.

Zanne said:
Will it trip off again if it senses there is still no water? Sometimes there is no water because something has gone wrong with the other pump.
Click to expand...

That is pretty cool. Any installation pics of where it gets installed? (my internet crapped out trying to load the video so I couldn't see the whole thing).

Zanne said:
That is pretty cool. Any installation pics of where it gets installed? (my internet crapped out trying to load the video so I couldn't see the whole thing).
Click to expand... 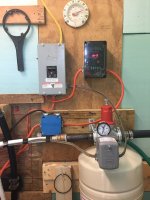 The stupid thing has jammed every day this week. I have to keep checking it and it's been raining outside. I still haven't worked out the electrical and stuff I was thinking of getting is no longer available. So, I'm thinking a temporary solution until I figure out wiring stuff is to extend the lever and see if I can mount one of the newer ones that still work on the original mount. If I can still find the original I may be able to compare lengths. It looks like the old one was more than 2x the length of the new ones. I could see if I have 2 older ones to remove the levers from (I thought I'd have to cut them but then I saw they form a [_ shape so I can probably straighten that bend out and use some Jb weld and maybe some sort of clamps (I'm thinking flat bands that crimp over or tighten with screws), some screws to bind them tight, and some t-rex tape for good measure. If I don't have enough length from the old levers I can see if I can get the gerryrigged one off the original one. Barring that, I can use flat aluminum stock as a bridge and keep one of the old lever pieces as the end so it will already have the hole. I need to make some measurements at some point.

Its raining right now and I'm sick so I will have to check when the weather clears up.

Someone recommended one of these types:
Alderon Big Switch
Would that be powerful enough if I had a good outlet in there?

So, I unjammed the rod again and started thinking I wish I could keep the rod aligned straight up and down. Then I had a thought.. If I can get a vertical pipe to suspend from the ceiling or something suspended from the ceiling like a block of wood with a hole or something, at just the right angle and height so the top of the rod stays in the pipe even when it is at its lowest, then it might stay aligned. Its a metal ceiling and is angled so I'll have to figure our how to maybe get some sort of cross brace with a board or something.. Hole will need to be large enough to not cause friction and interfere with movement, but small enough to keep it lined up.
You must log in or register to reply here.
Share:
Facebook Twitter Reddit Pinterest Tumblr WhatsApp Email Share Link