I'm trying to swap out my dishwasher as the old one sprung a leak. I have a new Bosch SHS863WD5N that I'm having issues with hooking up. I'm not entirely handy but learning as I go. I initially had a direct power hookup for the old dishwasher and now the new one doesn't, so I bought a junction box and got that squared away.

My current issue is the old dishwasher has a 3/8" PEX line running direct to it for the water supply. The new one has a 3/4" garden hose to 3/8" compression elbow joint that you need to install which I have. My problem is getting the PEX line attached to the elbow joint. The old PEX line has the hose with an adapter that just screwed onto the old dishwasher. Obviously that won't work here. I'm not sure how to describe the connection, but it plugged directly into the old dishwasher and then screwed on. I've attached pictures that hopefully will clarify some things or someone that knows this stuff can easily see what is going on.

I've looked online and can't find any sort of adapter that would work for me. I think I can replace the adapter off the PEX line with some SharkBite connector,, but that would require getting a PEX cutter to cut the old connector off and then adding the SharkBite. I'm hoping for just an adapter that would work, so I don't risk screwing something up. With underlying health issues in the home, I am limiting exposure, so can't have anyone come in and I'm trying to avoid going to a store. Would like to be able to order online and get shipped to me or pickup.

Any help/advice/suggestions would be greatly appreciated. Please respond in layman's terms as I am literally clueless on what I am doing. Surprising myself with what I've been able to do so far though. 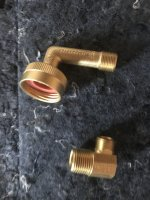 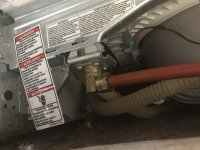 show a picture of the new dishwasher connection

Sorry. It was daughters birthday today, so been busy with her today. Here is a picture of the new dishwasher connection. The connection from the old one doesn't look like it comes off, plus it is a little corroded.

Is that a compression nut on the Pex line? Can you get the brass nut loosened off the little 90 piece? If there's a little brass sleeve around the Pex, you should just be able to use that to connect to the new dishwasher 90 (with the bigger hose connection).

Helper Dave said:
Is that a compression nut on the Pex line? Can you get the brass nut loosened off the little 90 piece? If there's a little brass sleeve around the Pex, you should just be able to use that to connect to the new dishwasher 90 (with the bigger hose connection).
Click to expand...

I'm not sure if it is a compression nut. It is somehow attached to the PEX line and once you insert the PEX into the adapter on the old dishwasher it just screws into place. I thought the other elbow joint without the garden hose adapter would work, but the PEX line wouldn't fix into the bigger hole on it.