I’m a DIY sort when time permits and have run into the limits of what I’m able to figure out.

A little background: the house was built in the mid/late 1800's, well depth and static level are unknown at present. The only well info I have is a note on the power service cutoff that says "60 ft of pipe in well, taken up and replaced 6/16/48". I know the well has been changed since then because there is dual polypipe coming from the well head to the pump. The pump is a Goulds J7 3/4 hp that feeds into two WELL-X-TROL WX203 tanks. The serial number on the pump motor is 8D98 so I figure the pump and the piping were updated around 1998.

This setup supplies the main house as well as a small duplex at the front of the property (4 people total), 1 top load and 2 front load washers, 3 dishwashers, 2 showers, 1 tub and 1 tub/shower, 4 commodes. Any time you try to fill the tub it gets about halfway there and then the pump will start to cavitate. We got into the habit of letting the pump catch up and then filling the rest of the way. It’s a bit of a pain but we got used to it.

I’m usually on the road working and home only on the weekends but because of COVID-19, I’m around full time and noticed the well pump wasn’t cutting off. The contacts on the pressure switch were burned so I replaced it with a 30/50 switch. The gauge hadn’t been working for a while so I replaced it also. After this, I noticed that the pump couldn’t exceed ~40PSI and I had to monkey around with the range and the differential adjustment screws to get the pump to cut off. That’s about the time the thought “Houston, we have a problem” ran through my head. Since I now had the time, I decided I was going to dive in and figure out what exactly was/has been going on with the well/pump.

I got online with the Goulds site and downloaded the technical brochure on the J pumps as well as their Jet Pump Installation, Operation and Troubleshooting Manual. I’d seen a comment on this forum from Valveman about the need for a backpressure valve and the technical brochure mentioned the need for a ‘pressure control valve’ with deep well systems. And the installation manual had this quote: “Failure to install and adjust a pressure control valve will result in loss of prime during peak usage such as filling a washing machine, bathtub or using outside hose bibs.”

Okay, this is the embarrassing part: that didn’t make sense to me because there was no valve of any kind on the pump; the line from the discharge ran directly to the pressure tank. I probably scratched my head three or four times before it occurred to me that the valve hadn’t been installed (duh!). So I called around and found a supplier for the AV22KIT, ordered and installed it, adjusting the backpressure flange so that it was about 20 percent closed. The pump would now hit 50 PSI so I readjusted the range and differential screws and the cut in is now 31 and the cut off is 48 and things felt great – for a bit.

As I kept reading in this forum about wells, pumps, and tanks, I began thinking that the pump was taking much too long to cycle and refill the tanks (and why were there two tanks anyway?). Before setting up to run a flow rate test, using a handheld gauge I checked the pressure in the bladders against the pressure on the new pressure gauge and they matched so I figured the handheld gauge was accurate. I drained the tanks and checked the pressure in the bladders; it was 22 and 25 PSI so I added air to make it 29.

I then isolated one of the pressure tanks (closed the ball valve to the inlet) so that only one tank would fill and also cut off supply to the house and duplex. This left the only outlet as the drain on the pipe from the pressure tank. I hooked a hose to this drain and then opened it up emptying into the sump. As soon as the pump cut in I closed the valve and timed how long it took for the pump to cycle off; this was 4 minutes and 43 seconds. I then took the hose and filled a 5 gallon bucket from the tank, dumped it, and filled it again. The pump cut on just as I’d emptied 6 ½ gallons from the tank. Ouch!

I knew I hadn’t adjusted the backpressure valve the way I was supposed to so I went back and isolated the pressure tanks so that I was running straight to the drain, I loosened the stop screw on the pressure control valve and turned on the pump with the hose running straight from the opened drain to the sump. I then adjusted the valve until it started reading about 15lbs of pressure on the gauge. The valve was about 70% closed at this point. (see the picture)

I then reran the flow rate test and it took 6 minutes and 35 seconds for the same 6 ½ gallons. This is where I am now. A flow rate of 1.4 or 1 GPM seems like a clear sign of something, what I can’t say so I’m asking here.

3. Am I doing the flow test wrong?

4. I thought maybe the injector has a problem but that doesn’t seem right after adding the backpressure valve and getting the pressure increase.

5. Closing the valve to 70% to get 15 PSI of backpressure makes me think maybe the impeller on this pump is shot. (Something else?)

6. I haven't measured amps on the pump, should I do that?

Any thoughts you'd care to share would be much appreciated.

(As it is now, it works, it's just burning a lot of juice to do it) 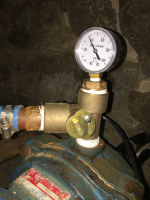 That is one way to measure GPM. But it is best to just open a faucet or valve, let the pump come on, then adjust the valve until the pressure stays constant at 30 or 40 PSI. You may even have to open multiple faucets to use enough water to keep the pump running at low pressure. Just measure the output of each faucet with a bucket and add it together. From 60' that pump should be producing 15 GPM or so. If not, I would suspect the well screen is clogged or the jet in the ejector at the bottom of those two pipes is plugged.

If it is a well problem, most times the pump will produce 15 GPM for a few seconds when the pump comes on then drop off instantly. Let the well recover for an hour or so before you try this.

Many thanks for the reply Valveman.

I don’t know how to measure GPM for just a few seconds at pump start so I took a hose and discharged it horizontally into one of those rubberized oval 40 gallon stock tanks and watched the arc of that flow as the tank lowered in pressure and then as the pump cut on. My hope was that if the pump had an increase in flow at startup, the pressure would also increase in the hose and the arc would pulse higher. No such luck, it didn’t even flicker. In that sort of setup, would increased flow show up the way I was anticipating? Here’s a link to the video if you want a look.

My mistake. I didn't let the tank drain, I was only checking the flow immediately after the pump cut in. Will run it again.

Does that leave me with pulling the pipe out of the well and checking for jet and foot valve for blockage or is the pump the more likely suspect?

Also, given your earlier thoughts about the jet, I’m fairly committed to opening the seal and cleaning or replacing the jet and foot valve.

By removing the vent connector, I was able to take a depth reading using a 3/8" stainless steel rod and a new (washed and double-rinsed) 5/32 poly line. The well casing is 6" steel. It was a tight fit with the knot but it went through. At around 60', the weight hung up on something and I thought I was at bottom (particularly since the note had 60' of pipe removed in 1948). I jigged it a few times and then the line pulled taut and kept going. Once it hit bottom I jigged it several times but it stayed at that depth. I tied a knot to mark the depth and pulled the line in. When I got to where the line was not just wet but soaked through, I tied another knot and pulled it the rest of the way out.


I'll admit, the depth of the jet confuses me (assuming that the obstacle I hit at 60' was the jet. (Maybe this is too much for one post?)

I re-ran the test using three 5-gal buckets, filling each one for 20 seconds. The volume in each was 6, 5, and 4.5 quarts respectively which I calculate as

So not quite constant but not a wild swing either. I'm beginning to think the problem is one of those 'Yes', and 'Yes': Yes, the pump is on its last legs and yes, the jet and foot valve needs maintenance.

Any of this making sense yet?

If it started out at 4.5 GPM instead of 10 GPM or so, it sounds like a pump related problem. Even a weak well will make good water for a few seconds.

Thanks again Valveman, I hope your 4th of July was enjoyable.

I replaced the pump this weekend and the flow is better but not yet what I'd like. I'm going to start another thread about the well and once that is addressed, I'll re-pipe the pump/tanks. I'll need some advice before that though on what configuration of CSV / tanks will support the two houses that are supplied by the well.

(I'm going to rebuild and convert the old pump and use it for irrigation).

What is the model number of the pump you got?

Valveman said:
What is the model number of the pump you got?
Click to expand...

Yeah the J7 should put out 12-15 GPM. After the well has been sitting unused for and hour or so, it should start out pumping 12-15 GPM. If it just starts out at 4-5 GPM something is not right with the pump.
You must log in or register to reply here.
Share:
Facebook Twitter Reddit Pinterest Tumblr WhatsApp Email Link