Hi, during a recent use of the bathtub on the second floor, we noticed water coming through the head jamb of a closet on the first floor. I'd like to figure out how to check this out. Here is what I know:

1. The previous day, someone was going to use the shower of the bath/shower combo. I was on the first floor when I suddenly heard lots of banging noise. The person had turned on the bath water and was then lifting up the plunger on the bathtub spigot to turn on the shower. They turned the water off. I came upstairs, tried the same thing, and didn't have any issues turning on the shower - so I didn't know what happened, but it appeared to be OK. Note that the banging noise was pretty significant. I had never heard this before.

2. The next day, someone wanted to take a bath. They were in the bathtub, when my wife noticed the water coming down through the head jamb of the closet on the first floor. I went upstairs. There was no water on the bathroom floor. The water was not running.

So what should I look for in trying to find the root cause? With the water turned off, there is no water leaking. I don't think it's coming from any leakage in the drain. We had used the bathtub a few weeks earlier with no issues. The loud banging noise is sure suspicious. We didn't notice any water leaking when the shower was being used, but maybe that's because the water wasn't on long enough to cause leakage?

Is there anything I can look at by taking the tub spout off or the escutcheon of the bath/shower valve? It's a tile bathtub wall, but I do have access to the back side from a bedroom. Am I going to have to cut a hole to see what's going on? If so, where would be the best place to cut the hole - opposite the valve? Could anything be leaking by the tub spout? My guess is that it's leaking somewhere by the tub spout.

Thanks for any ideas!
T

Is this a single handle tub faucet. If so try taking off the large round face plate and then run the water and try
looking inside the hole at the faucet body. Run the tub and then the shower. If you don't see any water leaking
and there is no water between the wall and the tub spout then you will have to open the wall from the faucet
body height down to the drain and then you can find your leak and repair it. Make yourself and nice wood
cover and paint it the same as the walls. Let us know what you find..
E

Yes, this is a single handle tub faucet (Moen). I will let you know what I can find out before starting to open up the wall.

Check to make sure the tubs overflow is sealed water tight to the tub.

Hi Folks - wanted to provide status on how this issue was resolved.

I took off the face plate on shower/tub valve and didn't see any indication of any water leakage. So then it could be the tub spout, the tub overflow, or the drain. I didn't think it would be the drain since several months earlier I had removed the drain to remove hair. Since then, it's been used many times without any issues.

I noticed I could access the bottom of the bathtub through a closet ceiling. I decided to open up a hole in the closet ceiling first before opening up a hole in the wall behind the bathtub. I opened up a hole and noticed water stains, but the source wasn't obvious. So I turned on the water and looked through the hole. Pretty soon I noticed water coming from bathtub drain area. Hmm... what's going on? After removing the drain, I saw this -> 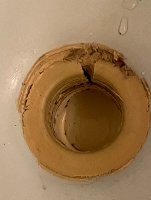 Well, that explains the leak. Not sure how that gap occurred in the plumber's putty. Several months earlier I removed the drain to clean out hair. I replaced the plumber's putty - but not sure why a chunk would have disappeared. I've done this a few times in the past for clearing out hair. The shower had been used several times without any noticeable leak. The bottom of the picture is towards the rear of the tub. Maybe when taking the shower, water never ended up by the front of the tub so didn't leak? I replaced the plumbers putty and everything is OK now.

Any thoughts on why that chunk disappeared?

With regard to the overflow, I did notice that the rubber was not soft anymore (33 year old bathtub). I was thinking about replacing the rubber gasket. I looked at several replacement gaskets at some big box stores. They didn't seem to be quite the same thing. I wasn't sure how easy it would be to replace. After pulling out the old one, how manageable is it to push in the new one? Do most gaskets fit in any tub?