Banging pipes close to water heater when flushing any toilet

Diehard said:
Which one did you end up getting?
Click to expand...

Watts LFN45B Copper 3/4-in MNPT Pressure Reducing Valve at Lowe's in Loganville Ga $55.98. Waiting for my son to come help me install it. It is in a tight spot close to the concrete floor where the main comes up in the house

FYI, many cities offer PRV's for free, and even install them for you for no charge. If this applies, call your water department.
G

havasu said:
FYI, many cities offer PRV's for free, and even install them for you for no charge. If this applies, call your water department.
Click to expand...

Wow, really? I will check this out tomorrow with the Gwinnett County Georgia water dept.

Yeah, I didn't know this when I replaced my $300 PRV either!

Yeah...but don't count on it.
Depends on water purveyors standards and/or location of PRV.
G

Thank you to all who helped solve this mystery. Actually the mystery is only partially resolved but the problem is gone. The PRV was the culprit. My son just finished replacing the PRV and the problem is fixed. Only question remaining is why problem only occurred when one of the three toilets were flushed. My only thought is that the float valves in the toilet tank apparently opens and closes slightly with the changing water pressure and
exacerbates (amplifies) the problem. Diehard was correct the county water dept was no help at all. The replacement went smoothly; even though the original (20 year old) valve was a different and discontinued model (Watt N35B DUSZ3) the replacement N45 B M1 was an exact fit. Since the old valve was a 3/4 inch in and out with universal joint fittings on both sides, my son was able to simply unscrew the universal fittings, remove the old valve, insert the new valve, use a teflon tape, and refasten the universal joints. Presto no more noise. 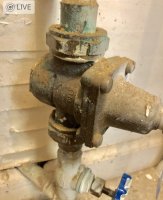 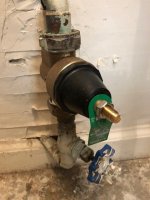 Excellent! Glad to hear it.

One last post on this issue. In the interest of documenting what we have found in our effort to identify and correct this problem, I offer my final thoughts.
1. The problem: Pulsating sound (pounding/hammering) in piping after flushing any of the three toilets in the house. Opening any other valve in the house has no effect (only toilets cause the noise). Noise stops when toilet fill is complete.
2. Findings: System has an installed PRV (Pressure Reducing Valve) which should maintain PSI between 50 and 75. System at 80 PSI (desired 50 PSI). Pressure could not be changed by adjusting the PRV (defective PRV).
3. Actions: Replaced PRV (see previous postings regarding original and replacement part Numbers).
4. Results and conclusions: Noise corrected by PRV replacement. Original PRV was 20 years old and was not reducing street PSI. System was over pressurized by 25 to 30 PSI. Initially, we were confused as to why only the toilets caused the noise. After PSI replacement water flow at showers and other faucets seems to have increase in-spite of the lower pressure. This fact leads me to the theory that the PRV was not only failing to reduce the pressure it was also restricting flow while water was running. Probably because there was materials caught in the valve restricting water flow. This would explain why only the toilets seemed to be affected; IF the toilet float valves were affected by the changing water pressure. (The pressure in the system was observed to fluctuate between 45 and 55 PSI while the noise was occurring). Suspect the float valves were responding the the pressure changes by opening and closing slightly compounding the hammering noise. All three float valves are of the same type, manufacture, and age. Hope this review and explanation will help and save others from the same malady.
You must log in or register to reply here.
Share:
Facebook Twitter Reddit Pinterest Tumblr WhatsApp Email Link