I'm currently renovating my kitchen and need wall space where an old cast iron radiator was. I've already removed the cast iron radiator and capped the feed/return lines in preparation for the kick space heater I plan to add. Before I get started I want to outline my plan and ask a few questions. I'd love input of any kind.

Question 1) Will having two kick space heaters in this loop effect other radiators? There was no difference in performance with the original KS heater in place this past winter. Should I keep my original kick space heater piping exactly as is? Now would be the time to change it if needed.

Question 4) Is there anything else I should be concerned about?

I plan to use copper or pex al pex and will be including a baseboard vent elbow on the return line so that I can bleed the unit. I will likely reduce down to 1/2" copper/pex directly from the 3/4" steel ball valve I've installed off the main and then run directly to the kick space unit. 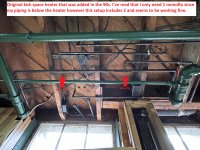 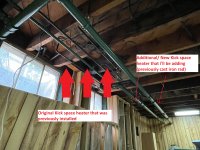 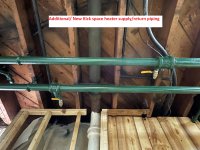 Any thoughts on this setup?
J

I don't like monoflow tees. But if you had no issues with the old heater and your new is the same you should be able to use the old piping for that one.

The run with the mono flow tees connects both main supply and main return. I’m just trying to understand why.
J

Connecting the main supply and return pipes where the original kick space is located.
J

I'm guessing the "original" heater was added. They hooked on wherever was easiest.
F

If the Supply and return are separate pipes that connect to the boiler supply and return and are both dead-ended on the far end, then monoflo tees are not used. If the supply and return is one big loop from the supply of the boiler to the return of the boiler, then monoflo tees are needed, and should be installed in pairs. Piping all of the radiators in series is a bad idea, especially for kick space heaters which only have 1/2" tubing.
BTW, the kick space heaters can also be mounted in a flush or surface mounted wall cabinet. They also always come with a strapped on aquastat in the heater, typically set at 120 degF.

I believe I have a two pipe direct return system similar to what’s illustrated below. 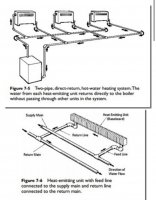 Any thoughts as to why these supply and return mains are tied together where the original monoflow t loop was placed for the original kickspace heater?

I just don’t understand why this is setup this way.
J

So that the heater gets the water it needs and the rest bypasses it. I'm guessing if you figured out the flow rates, the heater wouldn't return enough water fast enough. If there was a radiator there originally it probably had larger piping attached to it, and could return the water at the appropriate rate.

Why not just tie onto the green piping that is ready and has valves. One is supply and one is return. It would be a lot easier.

I thought the monoflow loop was required with this setup? I agree it would be much easier just reduce down to 1/2” and run lines directly from the supply and return to the kickspace heater.

I guess may last question is why would the monoflow loop be required in my first kickspace but not my second one? I assume because my first was the end of the supply /return main run?

You only need them when you have a one pipe pipe system. Look above in the picture you posted. There are no monoflow tees.

Great this is actually very simple, add feed and return lines directly from the mains into the kickspace.

additionally I’ll add a vent/ baseboard elbow on the return lines of both kicks so there’s a way to bleed. I’m planning to use something like this. I also assume the Pex needs to also have an oxygen barrier or Pex al Pex

Yes hepex is the preferred

Great I will go with hepex as opposed to pex al pex. I just assumed that having the aluminum oxygen barrier would be best but you don’t know unless you ask.... Really appreciate the assistance
J