1 faucet in the home has warm water, not hot

First post for me- Have a "never seen this before" question for ya: My daughter bought a model home about 7 years ago so the home is about 12 years old now. Just recently, the faucet in the master bath tub quit delivering "hot" water. The hot side is very warm (maybe 105 degrees or so) but definitely not hot .... never happened before. EVERY other fixture in the home (every sink, shower, etc) yields super hot water. The tub faucet is a Moen wide set with separate handles for hot and cold. I do not believe there is an "anti scald" device anywhere in the plumbing of this home.

The only situation I can visualize that could cause this problem is that there must be some (undesired) interaction between the hot and cold cartridges in the fixture; i.e., when the hot is opened it does something to let a bit of cold water out of the cold cartridge (even though the cold is "off") and it mixes to drop the temperature of the water exiting the faucet nozzle. I don't know how the cartridges are designed or if this is even possible but I can't envision any other explanation. This is the only fixture in the home that doesn't yield hot water when just the hot is turned on. (BTW- The cold side on this fixture works normally.) The tub fixture has worked fine for about 10 years and nobody has "messed with " the plumbing in any way. Ever seen this before? Is my logic plausible?

Thanks in advance for your thoughts; I am stumped on this one. 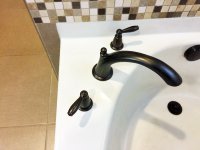 I am thinking there might be a by-pass where the hot and cold are directly connect , like in a washer or shower or laundry connection .

This sounds like a hot and cold crossover.
Often caused by a defective cartridge in a nearby single handle faucet.
But it can be a single handle faucet anywhere in the house.
Also sometimes a defective solenoid valve on a washing machine.
This is what arctic bill was getting at.
Moen brand valves, and others, are guilty of causing this.
Even when shut off, hot and cold can run through them and get mixed, as the water runs to other fixtures.
P

Is the water coming out of the wall hot?

If yes, bad cartridge in the faucet.
If no, problem is elsewhere.
Y

Thanks for the suggestions, guys. It turns out that when the home was moved into, there was no COLD water there at that master bath tub. The builder (large Colorado home- building outfit) quickly fixed the problem under warranty... and it has been fine until now. Daughter said you can still see the area where they had to cut ceiling sheetrock in the garage to gain access (2-story home with the master bedroom and bath upstairs.)

Jeff- There is, in fact, a shower adjacent to the tub and guess what?....it has a single-lever fixture.....a Moen. I may just "throw parts at the problem" based on what you guys have written and change out the cartridge in that shower fixture. It has been in there about 10 years or so and maybe that's long enuff anyway. A new cartridge there would restart the clock so to speak so not money/time wasted.

No access to any local shut off valves there at that tub, pasadena ........ would think codes would require it, but evidently not. I really believe that if the body of that tub fixture ever failed, one would have to make an access hole in the front of that plastic tub and replace it with some sort of white plumber's access plate! There is no plumber's access there now .... not even in the wall......it's all tiled. Cheeeze ....... bad news. As it is, I shut the whole house water off in the basement to work on the plumbing so it makes me real nervous thinking about the outcome if I broke something. Always thinking about how I could cap things off so the rest of the house could have water.

BTW- The first plumbing problem I found (at move in time) was that the hot was on the RIGHT and the cold was on the LEFT in the laundry room! Of course when daughter's appliance guys came and hooked up her washer they didn't know that ......... weird laundry results, of course. I just reversed the connections and made a laminated tag to hang there.........for the next installer. I have since been told that is one downside to buying a model home...........the craft are under insane pressure to get the model homes up so they can get sales going. I don't doubt that.

youracman said:
No access to any local shut off valves there at that tub, pasadena ........ would think codes would require it, but evidently not.
Click to expand...

Tubs with shutoff valves are exceedingly rare. However, there should be valves under that sink. If there isn't it would be a good idea, as long as you will have the water off for the shower, to add them. If you don't know how old the sink's hoses are change those at the same time.
Y

Just an update, guys...........but no joy. I did change out the cartridge in the nearby shower today. Jeff- it is in fact a Moen. The changeout was easy and went well but the problem persists. One noticeable change was that the the flow rate from the tub fixture was noticeably higher after I installed the new shower cartridge. I noted when viewing a LOT of different youtube videos on replacing a Moen single lever cartridge that 2 installers (pros I think?) did, in fact, mention that it could affect other fixtures. One guy said he had seen one of them cause a commode tank to fill with hot water .... he said the feeling was "divine: lol

Next, I plan to change out the (cheaper) cartridges in the wide-set tub fixture itself this week but I don't hold out much hope that will correct the problem with the "warm only" outflow from the hot side of the tub fixture. I note that Jeff said the problem could be any single lever fixture in the home so there are 3 more to go. Another possible cause mentioned was a bad solenoid in a washing machine......I will just shut off the stop valves there and see if that affects the water temp from the hot side of the tub fixture.

In my mind, I keep coming back to the re-plumbing that the builder had done to this model home to correct the problem at the tub where (originally) ONLY hot water came out ..... both from the hot and cold sides. BTW-I hadn't mentioned it earlier, but the home builder's original plumbers (they were fired by the homebuilding company) also reversed the hot and cold connections at the washer service. I simply reversed the washer's hoses so the hot is on the right and the cold is on the left and left a tag on it...........so it has worked fine for many years now. The home builder had another plumbing contractor firm come in and fix the "hot only at the tub" problem I mentioned and you can see where they gained entry to the (upstairs) tub area via the garage ceiling (12-ft ceiling) to do their work .... as new sheet rock was installed/taped and floated there later but never textured/painted. So I am wondering if for some strange reason a check valve or similar device was installed to fix the "hot only" problem to avoid a major re-plumbing effort and it now has developed backflow leakage. (I am 89, so I won't be looking into that area ..... 12 ft n the air.)

Did I mention ........... I don't recommend anyone buy a model home? At least one contractor told me they really, really push schedules on all of the guys ....... so they can start showing their flashy model ASAP.

I'll post back in the future as to what fixed the problem. I see a pro plumber in my daughter's future unless her ol' DIY dad gets lucky. :^) I can replace every one of the single lever cartridges for a LOT less than a pro plumber will probably charge so I may gamble and go that route. On the plus side, all those single lever faucets would then sort of have a new lease on life if I do that.

Turn off the stop valve on the cold water for the water heater.
Now go to the bathtub in question. Turn on the hot valve. The water should completely stop once the pressure bleeds off and drains.

If you’re still getting pressure then you have a cross connection between hot and cold.

There may be a pressure balance valve buried under that tub deck.......

Check with local codes and see if they were required when the home was built......or get a saw out.....
Y

Thanks, Twowax. I'll do the water heater thing. Of course this shade-tree plumber has never even heard of a pressure balance valve. :^)

youracman said:
Thanks, Twowax. I'll do the water heater thing. Of course this shade-tree plumber has never even heard of a pressure balance valve. :^)
Click to expand...

One of these could be hidden some place.